A public engagement project as part of Festival of the Mind, based at Yorkshire Artspace Exchange Place Studios. Visitors were invited to build their own ‘dream Castlegate’ and share their memories, stories and hopes for the future of the area.

ReMake Castlegate was a project about Castlegate…in Castlegate. Visitors, local residents, shoppers, students and artists worked together over the 10 days of the Festival of the Mind to produce a ‘dream’ model of a future Castlegate.

In 2014 Castlegate was changing rapidly. The markets had closed and were soon to be demolished, revealing the Castle and making way for a new city quarter. The project engaged directly with the people that this transition will affect, the people who live and work in Castlegate and its surrounding neighbourhoods, and also attracted a wider audience interested in the transformation of this area of the city.

Based at Yorkshire Artspace’s Exchange Studios, we worked together on a 1:200 base model that stretched from The Wicker to the High Street, with Castlegate at its centre. Through the course of the Festival of the Mind we worked with people to make models of existing and future buildings for the model, while collecting stories, memories and opinions about the area.

The model accumulated a collage of many different materials, proposals and ideas, including, a Wicker Arch made of wicker, a day-glo Park Hill, the ghost of Castle Market and an eternal playground. Castlegate, and the city around, was remade by many hands to reveal its diversity, idiosyncrasies and rich layers of meaning…capturing what has been lost, what is there now and what might be…

This project became instrumental in visualising possible futures for Castlegate that are created, debated and shared by many people; local citizens, artists and academics. ReMake Castlegate kickstarted a co-production process between Live Works, Castlegate and its communities that lasts to this day.

ReMake Castlegate
Find out our latest news, as well as details of current and past Live Works events happening in our Urban Room, in Sheffield and beyond. 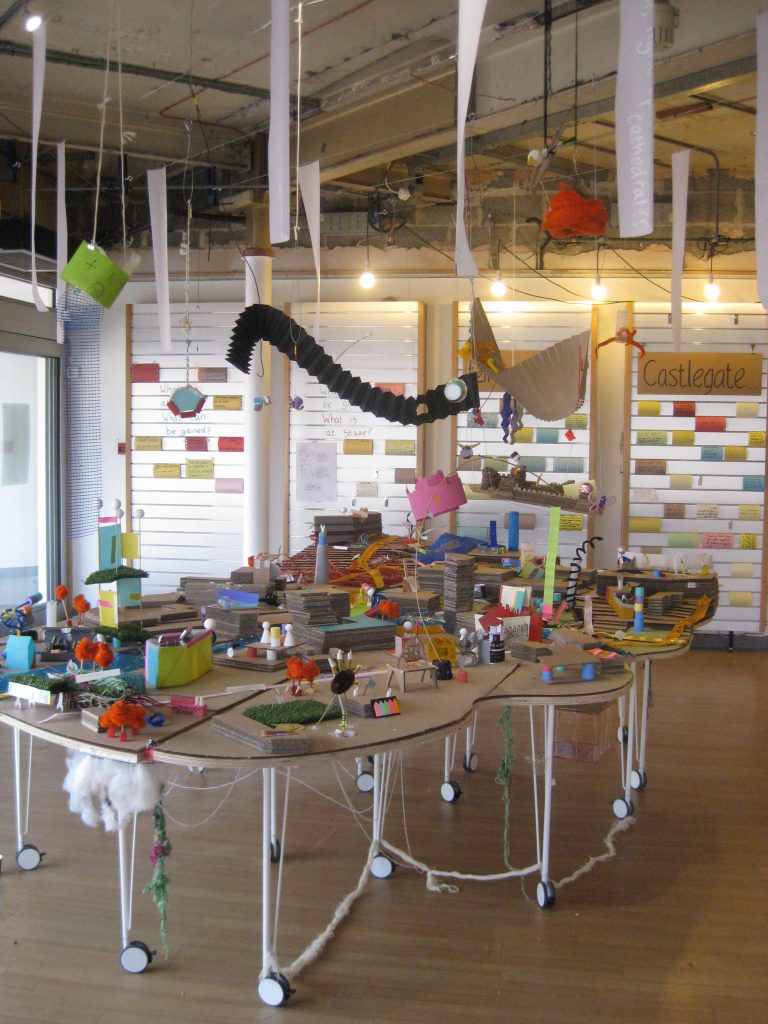 “Far beyond the tangible results, as powerful as they have been, the project has created moments that are impossible to capture. The energy through school, the sense of possibility and creativity, problem-solving and togetherness has touched the lives of so many children in deep, profound and meaningful ways. For all these reasons, the true legacy of this project is hard to overestimate.”

“Every town and city should have a physical space where people can go to understand, debate and get involved in the past, present and future of where they live, work and play. The purpose of these Urban Rooms is to foster meaningful connections between people and place, using creative methods of engagement to encourage active participation in the future of our buildings, streets and neighbourhoods.”

"Perhaps one of the most satisfying elements of our work with the university is their commitment to bring an impressive range of young student talent, diversity and enthusiasm to our projects. We think this is a priceless contribution that traditional consultancies tend not to offer."

“Live Works' concept of accessible architectural practice for the people of the city is one that will I know provide a model for university engagement across the faculties and is already leading the way in our institution.”

Prof. Vanessa Toulmin, Director of City and Culture, The University of Sheffield

“Live Works will create a dynamic relationship between the School of Architecture, architecture as a profession and the local community”