You Are Here is an interdisciplinary project, consisting of new temporary public art works, a one day symposium, and exhibition, to explore future ways of working collaboratively across the fields of art and architecture.

During December 2015, the commissioned artists, Leo Fitzmaurice, Office for Subversive Architecture, and Sans façon brought new temporary artworks to Sheffield.  These were presented at the We Are Here symposium, alongside panel discussions led by curators, practitioners and academics.

You can find out more about the temporary artworks at the We Are Here exhibition at Live Works, in Union Street, which is running between 25th February – 17th March 2016.

More details about the symposium and artworks can also be found below. 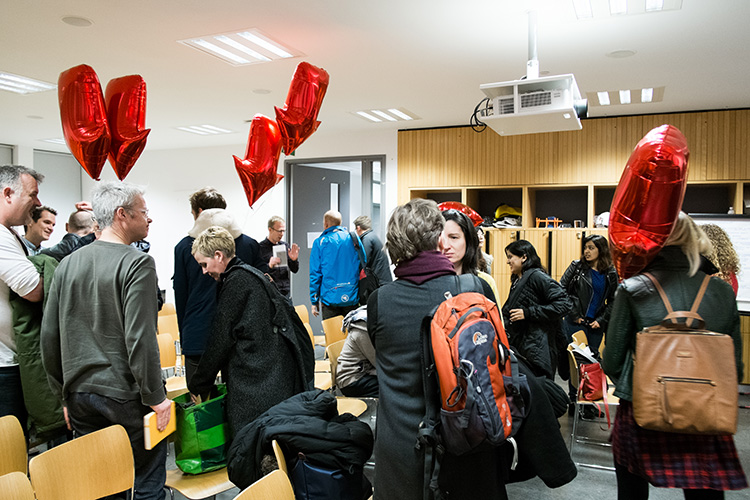 We Are Here Symposium

The symposium ‘We Are Here’ was hosted by The University of Sheffield School of Architecture (SSoA) and brought together 100 artists, architects, students, curators and academics to explore the challenges and opportunities in interdisciplinary collaborations between art and architecture. 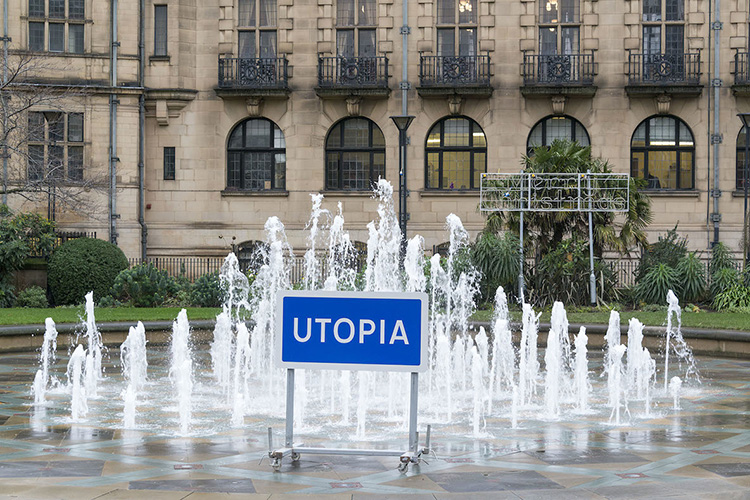 A public artwork with a difference, Leo Fitzmaurice’s Utopia is a mobile touring sign that travels around the city.  Between 20th November – 18th December, MArch students at Sheffield University School of Architecture collaborated with Leo to tour ‘Utopia’ around Sheffield city centre.  The sign, placed at carefully chosen sites around Castlegate, refreshes the way we see the city, allowing us to encounter the familiar in a way that unsettles us. 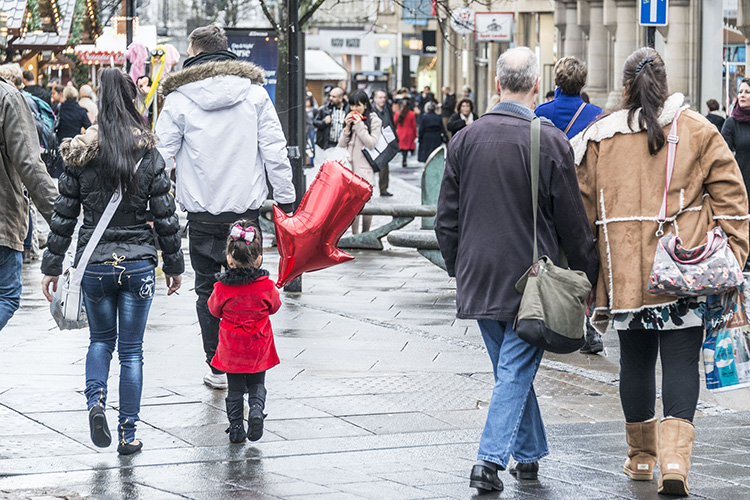 You Are Here
Sans façon

You are here is a slice-of-time experiment into the significance of “being” in the heart of Sheffield.  The event involved 1,500 helium-filled balloons in the shape of red arrows being made available to the public at three locations over three days in December. Individuals voluntarily took an arrow balloon with them on their journey and left a trace across the city, revealing the activity of the public realm. Allowing the citizen to become performer, You are here calls attention to everyday movement and exchange. The ubiquitous red arrow − a marker of place and often used to designate “you are here” on a map − is altered to instead mark the people rather than the place.

Office for Subversive Architecture’s temporary intervention engages directly with Park Hill, a brutalist housing estate in Sheffield City Centre which has been undergoing redevelopment since 2007.  The intravenous route is the fastest way to deliver fluids and medications throughout the body; this body of architecture received therapy over the course of a month, between December and January. The process is intended as a statement of breathing life into abandoned architecture which is in the process of being transformed.

You Are Here
Find out our latest news, as well as details of current and past Live Works events happening in our Urban Room, in Sheffield and beyond.

“Far beyond the tangible results, as powerful as they have been, the project has created moments that are impossible to capture. The energy through school, the sense of possibility and creativity, problem-solving and togetherness has touched the lives of so many children in deep, profound and meaningful ways. For all these reasons, the true legacy of this project is hard to overestimate.”

“Every town and city should have a physical space where people can go to understand, debate and get involved in the past, present and future of where they live, work and play. The purpose of these Urban Rooms is to foster meaningful connections between people and place, using creative methods of engagement to encourage active participation in the future of our buildings, streets and neighbourhoods.”

"Perhaps one of the most satisfying elements of our work with the university is their commitment to bring an impressive range of young student talent, diversity and enthusiasm to our projects. We think this is a priceless contribution that traditional consultancies tend not to offer."

“Live Works' concept of accessible architectural practice for the people of the city is one that will I know provide a model for university engagement across the faculties and is already leading the way in our institution.”

Prof. Vanessa Toulmin, Director of City and Culture, The University of Sheffield

“Live Works will create a dynamic relationship between the School of Architecture, architecture as a profession and the local community”